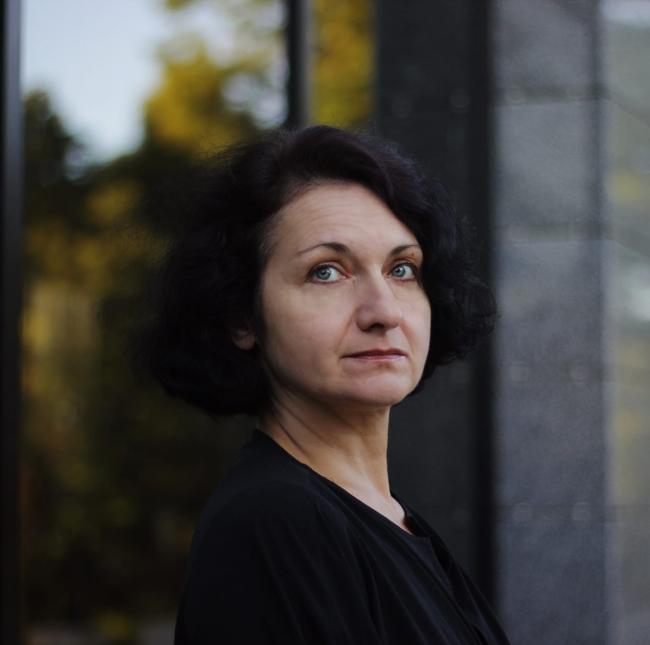 Neda Nezhdana was born in 1971 in Kramatorsk, Donetsk Region (Ukraine). A playwright, culturologist, art critic and translator, she graduated from the Institute of Foreign Languages of Kyiv (French philology) and the Mohyla Academy of Kyiv (culturology). She has the PhD in literary theory and was instructor at Kyiv National University Taras Shevchenko.

Neda Nezhdana worked as the journalist, head of the department of theater in the magazine "Cinema-Theater" (Kino-Teatr), dramaturg in the theatre “Kyiv”, director, screenwriter. Since 2006 – one of founders of the independent Kyiv theater "MIST”. Since 2007 she has been working at the National Centre of Theatrical Art Les Kurbas as leader of the department of dramatic projects including online libraries, anthologies of plays, scientific conferences, stage readings, workshops and others. Neda Nezhdana is the author of two collections of poetry Trees and People and Roll-O‘-Cherry (1996), a collection of plays Promotion of the other (prizewinner of the Presidential Grant, 2007), books of plays Maidan Inferno (2016, France), Doors (2017) and The Suicide of Loneliness (2022) in Turkey. She wrote 24 original plays and 8 ones based on the prose. Most of them were published and almost all of them were staged (more than 100 performances). Also she compiled about 20 anthologies and collections of Ukrainian and International plays. Professional realization of her works (publications, performances, stage readings, awards, festivals) was in most cities in Ukraine and in other countries: Belarus, Poland, Serbia, Macedonia, Kosovo, Croatia, Russia, Georgia, Armenia, Lithuania, Estonia, South Africa, Kyrgyzstan, Germany, France, Turkey, Portugal, Austria, Sweden, U.S.А., Australia and Iraq.

Neda Nezhdana translated 18 plays from French, Russian, Byelorussian that were staged in Ukraine. She is the author of over 80 articles about the drama, the theatre and the cinema.

Many times she has been prizewinner of competitions and laureate of art festivals. She won the prize of Petro Kravets, Grant of President of Ukraine, winner of the art competitions (“StArt”, "Coronation of the word ", "Smoloskyp", " Kyiv Pectoral", “Biennial of Contemporary Art”). Four her plays have been included in the catalogs of the best plays of Europe and the catalog "European Theatre Convention". Neda Nezhdana was chairman of the Confederation of playwrights of Ukraine, patron of Ukraine in the Biennale "New European Plays" in Wiesbaden. She is chief of Ukrainian committee of International Network Eurodrama. One of the winners of the international competitions of WPIC Conference in Stockholm and in Cape Town, «Journées de Lyon des Auteurs de Théâtre” (Lyon, France) and Eurodrama in Lisbon (Portugal).