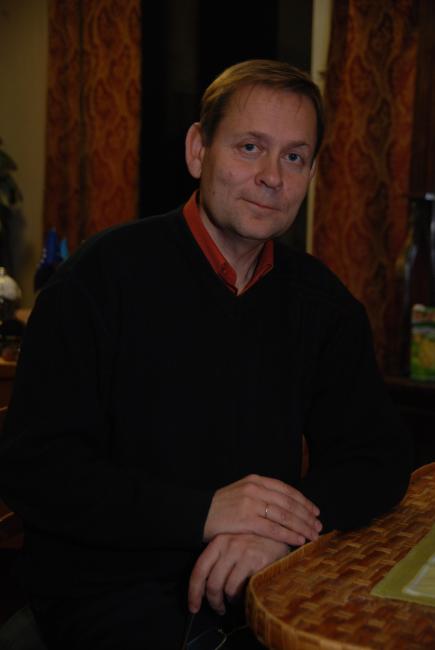 Journalist, playwright and screenwriter. Born in Luhansk Region. Graduated from the Taras Shevchenko National University of Kyiv (journalist). Worked as an editor in newspapers and magazines and on TV (ICTV and Channel 5). Currently, an academic secretary at the academic department of the Les Kurbas National Center of Theatre Arts. Author of screenplays “To Get to the Priest” and “The Ukrainian Solomon” and co-author of film stories “Mad Priests” (printed in a separate collection). His works were published in the anthologies of young dramaturgy “Waiting for the Theater” and “Searching for the Theater”, collections “Strike of Illusions”, “Beyond the Pause”, “13 Modern Ukrainian Plays”, “The Mystery of Being”, “Dramovychok”, “The Labyrinth of Ice and Fire”, “A Different Drama”, etc. Owner of the author’s collection of modern drama “Alchemy of Time”. Plays “Asso and Piaf”, “Wild Honey in the Year of Black Rooster”, “Bring the Waiter Down from Heaven”, “The Last Cry of Matriarchy” and “Territory B” were produced all over Ukraine and abroad – Minsk (Belarus), Prešov (Slovakia) and Chicago (USA). His works were translated and published in the Republic of North Macedonia, Serbia and France. Laureate of festivals and competitions: Award І of the Festival of Modern Ukrainian Drama, “Teatr on-line” Festival in Belarus,  the competition of radio plays “Reviving the Forgotten Genre”, festival “The Kolomyya Shows”, comedy contest “Golden Applause” and “Coronation of the Word”. Member of the National Writers’ Union of Ukraine