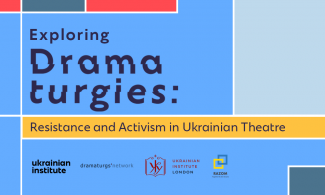 On Wednesday, July 13, 2022, there will be an online roundtable discussion with Ukrainian playwrights Anastasia Kosodii and Lena Lagushonkova, and Ukrainian theatre specialist from London University Dr. Molly Flynn.

The discussion will be about exploring theatre’s role in shaping political agency, supporting resistance efforts and community organising in Ukraine.

Between the Euromaidan Revolution in 2013/14 and Russia’s full-scale invasion of 2022, Ukrainian playwrights, directors and dramaturgs have been at the forefront of their country’s grassroots political movements.

This event is free to attend and open to all. Register via link: https://bit.ly/3n8EY3q

When registering online, you will be able to make an optional donation to raise money for Razom for Ukraine, which is providing essential humanitarian war relief and recovery to citizens throughout Ukraine. All funds raised will be paid by the d’n to Razom for Ukraine following the event and an update provided to attendees.

This event will be supported by a translator Iryna Inozemsteva and presented in English and Ukrainian.

Anastasiia Kosodii is a Ukrainian playwright and theatre manager, participant in the drama festivals Week of Contemporary Play (Kyiv) and Drama.UA (Lviv). In 2016 together with her colleagues she founded Zaporizhzhia New Drama Theatre, the main focus of which was the new Ukrainian drama and work with current problems of society. In 2017, the theatre implemented the project Theatre Lab: Beyond Fear: participants from six frontline towns (Bakhmut, Mariupol, Kramatorsk, Pokrovsk, Starobilsk, Severodonetsk) were trained in theatre arts and management to open independent ones in their towns. She is one of the co-founders of the Theatre of Playwrights (Kyiv) and is working now on the international project ‘On War / Vom Krieg’ in partnership with Muenchner Kammerspieler, Gorki Theater (Berlin) and Royal Court Theatre (London).

Lena Lagushonkova is a Ukrainian playwright. She made her debut at the Week of Contemporary Play festival in 2018 with her play BAZA. Participated in laboratories of the Young Theatre, NSTU and the PostPlay Theatre School of Emergency Drama and the Week of Contemporary Play festival (Kyiv) and Drama.UA (Lviv). Currently she is chef-dramaturg of Vasyl Vasylko Odesa Ukrainian Drama Theatre. She was awarded a European New Talent Drama Award 2022 Shauspielhaus Stuttgart.

Dr. Molly Flynn is a Senior Lecturer in Theatre and Performance at Birkbeck, University of London. Her current research analyses theatre in Ukraine since 2013. Her book Witness Onstage: Documentary Theatre in Twenty-First-Century Russia was published by Manchester University Press in 2020. Alongside her work as a lecturer and a researcher, Molly is also a translator, producer, and theatre-maker. She is a co-founder of the US-based experimental theatre collective the New York Neo-Futurists.