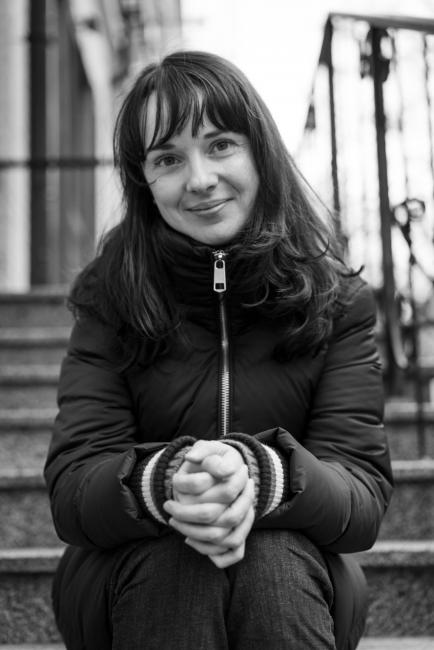 Oksana Grytsenko is a Ukrainian playwright and screenwriter. She wrote her first play, Saniok, in 2019 as a result of drama courses by Maksym Kurochkin and Anastasia Kosodii at Post Play Theater. This play was shortlisted at the Topical Play Week in 2019 and had a performative reading at Lesia Ukrainka Drama Theater in Lviv.

Her second play, Don Juan from Zhashkiv, was shortlisted at Topical Play Week in 2020. Based on this play, Grytsenko created a screenplay for a feature movie with the same name. The film was produced by Kristi Films and received funding from Ukraine’s State Film Agency. The release of the film was scheduled for December 2022.

Grytsenko is a co-founder of Kyiv’s Theater of Playwrights.

Before starting her artistic carreer, Grytsenko had worked as a journalist for about 20 years, covering the Russian invasion of Georgia, Ukraine’s EuroMaidan Revolution, Russia’s annexation of Crimea and Russia’s war against Ukraine. She has worked for Ukrainian and foreign publications, including the Kyiv Post, AFP, the Guardian, Pittsburgh Post-Gazettee, Marie Claire, Ukraine Verstehen, Huck Magazine, Nikkei and the Wall Street Journal.